Despite being a decade old and from three console generations ago, Max Payne 3 still remains a classic that has yet to be rivaled within its genre. It plays to all of Rockstar Games‘ strengths, from fantastic writing to embracing their desire to craft linear spectacles. Max Payne 3 has left many longing for more whether that be through a sequel or a remaster. Despite these calls for a more modernized version, this is a game that still holds up tremendously well, and in some ways, feels more advanced than some of Rockstar’s more recent games.

Max Payne 3 raised the bar for third-person shooters with its gameplay. Remedy Entertainment had already redefined how to make a shooter with the first two entries, but a nearly 10-year gap between Max Payne 2 and 3 allowed technology to evolve and give Rockstar the opportunity to apply its detail-oriented approach to game design to the Serie. Remedy created the foundation of Max Payne, a slick shooter that made you feel like a cool action hero, but was burdened by the technology and budgetary limitations at that time. Max Payne 3 heightens all of Remedy’s ideas, giving them a much more tangible, immersive quality that removes a lot of the barriers between the player and the character on screen, ultimately unifying them as one entity. Max Payne 3 gives players full control over Max. Not just his arms and legs, but his whole body. Rockstar applied its animation-based movement to create a smooth and fluid experience that immerses the player in the chaos.

The gunplay in Max Payne 3 is a big piece of this. It’s all about precision, and it is relentlessly satisfying. This is a game that largely dissuades the player from using any kind of auto-aim and encourages the game’s free aim system instead. It really helps sink the player into Max’s shoes and creates a truly rewarding experience. You earn your cool kills, you save yourself from a close call – it’s all you, not the game assisting you to give you the illusion of control.

That precision is extended to the game’s movement too. Rockstar created a movement system that allows a very flexible Max that doesn’t have to rotate his entire body 90 degrees just to turn to his right. If the player is running straight down a hallway, but there are enemies shooting at Max from his right, Max can maintain his momentum and twist his hips to shoot back without stopping dead in his tracks or awkwardly begin moving toward his attackers. Max Payne 3 ’s gunplay works because it feels loose and not tight and restrictive. Even if you throw yourself into an object during a Shootdodge (Max Payne’s signature diving move), forcing you out of the slow-motion moment, Max doesn’t automatically get up to make himself open to a storm of bullets. The player can lay there and roll around on the ground until they’re ready, allowing themselves a moment of brief cover on the ground.

Max is like a bullet train with the brakes ripped out, nothing but an absolute permanent end will stop him from achieving his goals. He is always hurtling himself through each level to rescue someone, escape a hairy situation, or kill some1. The momentum is always building towards the game’s explosive climax and there isn’t much time to catch your breath. You’re not allowed to stop because it only takes a few well-placed bullets to take Max down, so you must always be moving which is why mechanics like Shootdodging are so crucial to survival in this game. 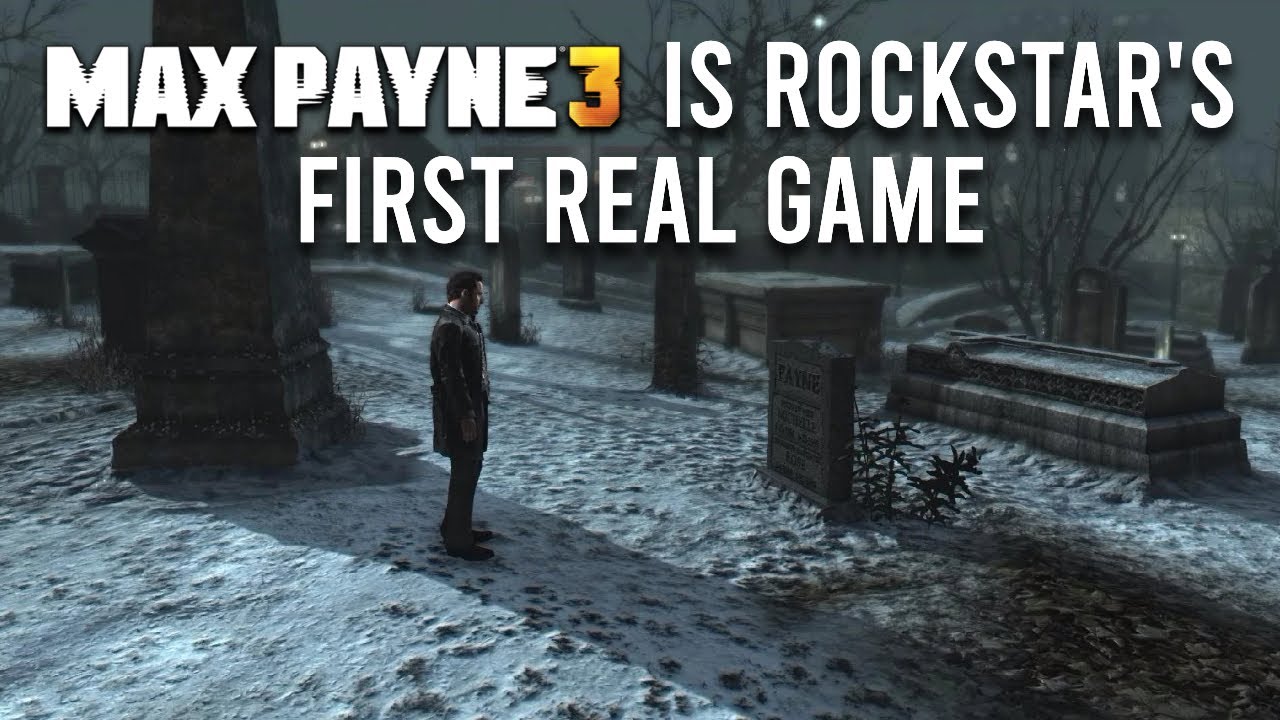 You’re forced to act instinctually by picking up weapons off the ground while dodging bullets, diving through things or off of balconies, shooting objects to cause environmental destruction, etc. Although Max can take a few painkillers and heal himself, it doesn’t take much to kill him. He is incredibly vulnerable and it forces the player to be on their toes and actively improvise. As Tom Cruise’s Maverick says in Top Gun, „You don’t have time to think […] If you think, you’re dead“.

The game’s insistence on having the player improvise goes beyond shooting guns and strategic movement, though. The game’s physics and animations are another tool for the player to abuse and use to their advantage. If you shoot someone in the arm or leg without killing them, they may stumble into the person standing next to them, making both of them vulnerable. You can jump into someone and knock them over, shoot someone until they’re off balance and fall down a set of stairs, or make someone trip over a body in front of them. The AI aren’t perfect killers who make zero mistakes – they stumble as much as the player does. In a game where it can be easy to run out of ammo in your preferred weapons, it’s incredibly helpful to be able to strategically utilize a few bullets to cause an enemy to flop around for a moment or even use Max’s own body against the enemies by diving straight into them.