In another one of the sessions at Goafest 2022, the audience witnessed a quick chat between Madison Media’s group chief executive officer and OOH at Madison World and Ankush Sachdeva – co-founder and chief executive officer, Sharechat & Moj. Sachdeva shared what got him started on the journey of building Sharechat, as he recalled his college days and how a simple Facebook post helped him get an idea on driving traffic.

Sakhuja : When I wanted to use the app, I couldn’t find English on Sharechat. I believe you started with English but now you took that off. Wieso den?

Sachdeva : Yes, well, the first version of Sharechat actually had English because why not? A lot of people want to speak English and consume English content. So we had an option.

And when we launched the product, almost 70 per cent of our users on the first page picked English. But once they go inside the app, the engagement is super low. And to our surprise, our English content is not that bad. We wondered how they were so low.

We actually used to call people to understand how they like the product. So we found that these people who had picked English do not speak beyond hi and hello. They had zero English vocabulary. But when given an option between English and Hindi, they will still pick English.

Hence the decision, and it has been in the system since then.

Sakhuja : At this point in time, is there a reason for people to coexist on both Sharechat and Facebook or do you expect migration from one to other?

Sachdeva : I think we were fundamentally about public content, with very strong differences. We never relied on any friend graph or a fundamental thesis. Machine learning is strong enough that we can recommend the right content without even getting into the whole following graph sort of thing.

When you fetch a feed on Facebook or Twitter, you get a set of ten contents. For us, our journey starts from 100 mn content posted, we have to fetch the relevant content for the feed. That’s difficult but more powerful, because we don’t have to wait for you to jump through hoops, follow an account and then get a key. We are smart enough to figure out what you want at that critical time.

Sakhuja : So do you see the two coexisting?

Sachdeva : I will not comment on them. But I think they are also very focused on follow graphs, which we don’t fundamentally believe in. We will build a system to give people content, aggregate all the public information and give it to the users even before they search around it. That’s our mission. You will have 10 different apps coming and going. I would rather not comment on 1.

Sakhuja : I believe, since TikTok was banned, within a record time you launched Moj, and then after that you acquired MX Takatak. Wie ist das passiert?

Sachdeva : Yeah, it was an interesting thing. So I think I can share a bit of an insight here. Bytedance made TikTok and Helo. And when they came into India, they tried to invest the money, and they copied Sharechat.

Literally copy every single pixel. We went to the Delhi High Court, filed a lawsuit. Fortunately, unfortunately, the Delhi HC does not understand the technical aspects. And therefore they said to change the UI. And the case was dismissed.

So we had a long history with Bytedance. And when TikTok was brought down, we thought we’re not letting this go.

Sakhuja : Creator vs Influencer, which one do you see expanding more?

Sachdeva : Anybody can become a creator. But when I talk about superstar creators or influencers, the brands would love them and all the agencies would want to get hold of them. This is because India is very diverse.

If you want to really innovate your story in Tamil, Telugu, Marathi, Oriya, there is nobody better than a local influencer, who will narrate your story in a very touching way to their fans and followers.

I think that the future of how brands will go pan Indian, so we want to create an army of a million monetisable superstars.

Sakhuja : About monetising models, whenever monetising happens where do you think it is going to come from?

Sachdeva : Gifting is turning out to be a very, very interesting way of monetisation, which is even expanding our own internal estimates.

Sakhuja : What is your message to the advertising gang here on how to use the platform?

Sachdeva : See, in the next five years, every single person who’s online in India will be consuming a short video app daily. That is where the world is going to be. You will see a large part of the human attention gravitating towards short form content where they’re consuming 15 second videos in multiple sessions, because if they don’t like something in two seconds, they will swipe up. 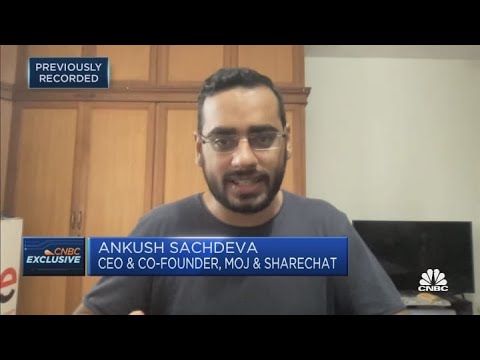 If a new media or innovation is to be the future of media, we should all look thoroughly into it and see what we can innovate.